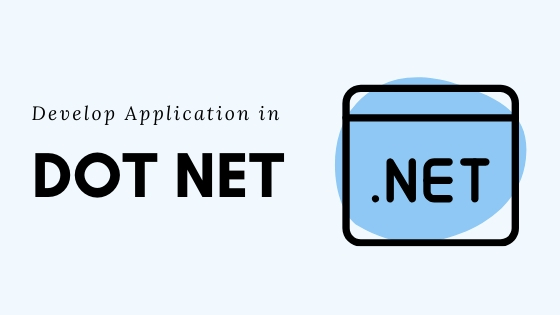 WHAT IS THE BEST WAY TO DEVELOP A WEB APPLICATION IN DOT NET?

Regarded as one of the most popular and widely chosen frameworks for developing web applications, .NET comes with multiple benefits. It is used for building interconnected, modern and cloud-based applications with the help of many tools and services.

Any web developer who is working with .NET cannot use the technology in the best of ways until the time the right tools are used in a suitable manner. Although Microsoft technologies can be used in numerous ways for making a .NET application, there are some tools and technologies that are extremely important.

In this blog, we will discuss the best ways to develop a web application in Dot Net. So, let’s begin:

Out of the two MVC frameworks for .NET, the ASP.NET Core is considered to be the modern one. Released as an important part of the .NET Core, it runs on Windows, Linux and Mac OS. It is highly recommended for the development of web applications that follow the MVC architectural pattern.

The applications made with ASP.NET Core are highly extensible. Internally, every incoming request is processed with a pipeline of components that can do some work before passing the request on to the next component in the pipeline after receiving a response.

These components included in the pipeline are called middleware. Most of them are built into the framework and offer standard web application functionalities such as routing, authentication, exception handling, HTTPS redirection, serving a static file, CORS configuration, etc. This framework is also very useful in developing custom middleware.

Right on the surface, ASP.NET MVC is not so different than ASP.NET Core. It includes three important folders that are:

A superior software that is used for developing flexible web applications on the .NET framework is known as ASP.NET API. It helps in building HTTP services approaching a wide range of customers on multiple devices.

Embedded with APIs that come for grouping connections and authorization, ASP.NET SignalR helps in making communication between the server and client. In addition, it also supports web sockets and fallbacks to other different versions.

An open-source JavaScript framework that is managed by Google, the fundamental functionality of AngularJS is to expand the browser-based web applications with the help of the MVC pattern. This makes the process of development, testing and debugging very easy.

With ever-evolving technology, customers desire to have a well-made web application that comes with many features. Microsoft .NET is one of the best examples that deliver high-performance web applications to customers.