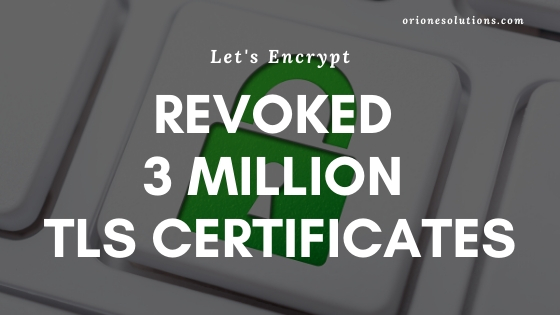 CAA is basically a security feature that allows the domain administrators to create a DNS record that restricts the certificate authorities to issue certificates for that specific domain. The domain owners can add a ‘CAA field’ to their domain’s DNS records. Only the CA listed in the CAA field can actually issue a TLS certificate for that domain.

The certificate authorities such as Let’s Encrypt are supposed to follow the CAA specification by the law or they have to deal with serious penalties from the browser makers. Let’s Encrypt project disclosed on February 29th, Saturday that there has been a bug in Boulder which ignores CAA  checks. In an official report issued by Let’s Encrypt, they described the bug as follows:

The team of Let’s Encrypt patched the bug on Saturday itself in the two hours maintenance window and the result of which is that Boulder is now verifying CAA fields properly before issuing any new certificates.

However, Let’s Encrypt mentioned that it was highly unlikely that someone exploited the bug but they were still revoking all the certificates that were issued without proper CAA checks. This was to follow industry rules as dictated by the CA/B Forum.

HOW TO CHECK WHO IS AFFECTED BY SSL CERTIFICATE BUG?

There is a way to check. The following web page has a diagnostic tool to identify if your website is affected or not:

3 MILLION OF 116 MILLION CERTIFICATES WERE IMPACTED:

The engineers of Let’s Encrypt team disclosed that out of the 116 million TLS (Transport Layer Security) Certificates, only around 2.6% were actually impacted by the issue while representing a total of 3, 048,289 certificates.

The system administrators and the webmasters who are presently using the Let’s Encrypt certificates for their particular networks and servers have the ability to check the list of serial numbers of affected TLS certificates. In addition, they can also visit a website to check if their website has been impacted just by entering their domain name.

Until last week only, Let’s Encrypt announced issuing around one-billionth free TLS certificates making it one of the most successful CA up to date. In the last five years of history, the Let’s Encrypt project has actually managed to stay free of major problems. However, some of the platform-specific bugs have been reported sometimes. This time, Let’s Encrypt is clearly advising the users to renew their impacted certificates.