React vs Angular vs Vue: Which is Best? 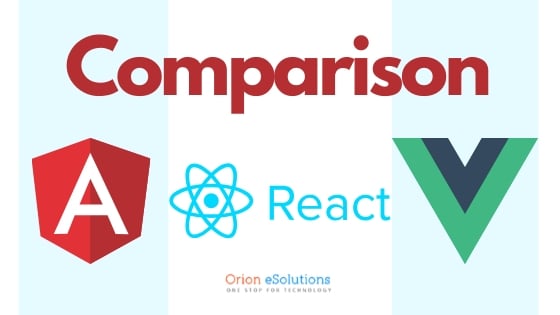 REACT vs ANGULAR vs VUE : Which is Best?

A significant decision to make while developing a new application is which front-end technology will be the most suitable? The JavaScript frameworks are quite popular when it comes to some of the biggest tech giants making the most of their benefits during web application development. Because there are so many frameworks available, the web app developers always need to be sure about their choice.

This ever-evolving and the technology-efficient world require web application developers to develop an interactive web application for different businesses. Regardless of whether you are a web app developer or a business owner, your tech guide must be kept handy so that you make better decisions.

Most web application development companies in India increasingly argue over choosing the best tool for JavaScript web applications. In an attempt to solve this confusion we are here with a blog on Angular vs. React vs. Vue: Which is best out of these?

Here will compare all three technologies dependent on multiple factors, similarities, and potential differences. In addition, we will also find out what is it that makes these frameworks stand apart and how are they useful in the custom software development world.

Started by Google in the year 2009, Angular is an open-source front end web application framework that has MVC architecture. It makes the process of web development, maintenance, and the testing of applications much easier for web developers. Because of its extensibility feature, it has the capability to work pretty well with other libraries.

Since it is supported by a huge development community, web application development becomes easier while working with Angular. If businesses make the decision to hire Angular developers they can expect great results because this framework is highly suitable for building interactive web applications. Although it is one of the most preferred choices for engaging web applications, it is quite popular for single-page applications.

Supported by Facebook, React is considered as one of the easiest and interactive frameworks. It comes with a library that can be utilized for creating highly attractive UI components. Not only is React highly suitable for the components that represent the data changes frequently, but it can also be used to build reusable user interfaces.

The core ideology of React.js is to allow developers to learn once and then write anywhere. Developers prefer working with React because creating mobile applications becomes a relatively easier task. It presents the use of JavaScript XML and JSX which is actually a syntax extension to JavaScript. Although it does not require the use of JSX necessarily but using proves to be supportive in building UI components and fixing errors.

Some of the most prominent companies that have created successful applications with the use of React are Facebook, Yahoo, WhatsApp, Netflix, Dropbox, New York Times etc.

Vue.js is an open-source JavaScript framework that has the capability of developing single-page applications when used in combination with modern tools and some supporting libraries. It can be used for the web application framework because it helps in simplifying the process of web development considerably. For some time, Vue.js has successfully attracted a good share of attention from some of the best web developers from across the world because it comes with an ability to create great applications.

Popularly known as one of the most progressive frameworks, it is used for building eye-catching UIs for web and mobile app development. Started in the year 2014 by a famous Google developer, this framework was created to exclude the limitations of Angular. Although it comes with many benefits, one of the most important ones because of which it is selected is its ability to work seamlessly without creating problems.

Some of the companies that use Vue are Alibaba, Adobe, Behance, Codeship, Reuter, Grammarly, EuroNews, etc.

Although Angular offers a comprehensive framework, React provides unmatched simplicity and flexibility. The main difference between Angular and React is that React comes with a virtual DOM that carries better performance as compared to Angular.

Being one of the most progressive frameworks, Vue can be integrated into any existing project. It comes with a huge set of tools and libraries which allow the framework to respond accurately to the needs of enterprise-grade applications. Therefore, it can be concluded that Vue is an affordable solution for small and medium-sized applications.

Everything said and done, it must be noted that although there are peculiar differences in all three frameworks, there is no special difference in which framework should be chosen as it will take time to get used to all of them. The web development company or web developers should just make sure that the right choice is made in every single case at the time of development.