NodeJS vs Angular: How they are different from each other? 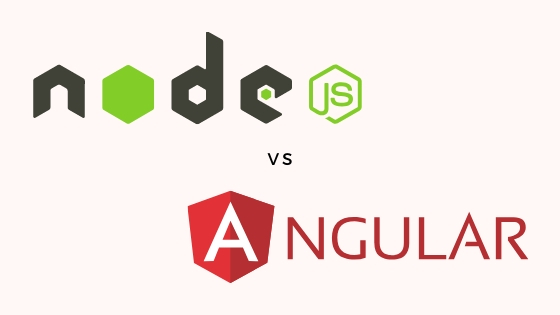 NodeJS vs AngularJS: HOW ARE THEY DIFFERENT FROM EACH OTHER?

AngularJs and NodeJS are used for making efficient client-side and server-side web applications. Both these frameworks help in creating interactive and feature-rich cross-platform web applications. They are widely used open-source JavaScript-based technologies.

Where AngularJS is a JavaScript framework, NodeJS is a cross-platform runtime environment. Being a client-side JavaScript framework, AngularJS allows creating dynamic web applications that are dependent on the model view controller architectural pattern and HTML as a template language. As opposed to this, NodeJS assists the programmers to create scalable server-side applications utilizing JavaScript as a server-side programming language.

Therefore, NodeJS and AngularJS differ from each other in functionality, performance, usage, architecture, etc. In this blog, we are going to see an in-depth comparison between NodeJS vs Angular. So, let’s begin:

As a JavaScript framework, AngularJS is an open-source web application framework that is managed by Google. It can be added to an HTML page with a <script> tag and it extends the HTML attributes with directives while binding data to HTML with expressions.

AngularJS enables the users in adding dynamic views into their web application and is also integrated with the model view controller architecture. This particular feature has enabled AngularJS to be one of the most preferred frameworks when it comes to creating data-driven and interactive web applications.

NodeJS is a cross-platform, open-source runtime environment that is used for developing server-side networking applications. The applications made using Node.js are written in JavaScript and they can run mostly within the Node.js runtime. It offers a rich library of JavaScript modules that simplifies the process of web application development to a large extent.

In simple terms, NodeJS is considered to be an ideal framework for developing server-side, scalable and data-intensive web applications.

HOW NodeJS & Angular ARE DIFFERENT FROM EACH OTHER?

In conclusion, NodeJS and Angular are both open source projects that have a prime objective to build web applications with the help of JavaScript. Although their architecture and working model is pretty different, both of them have extensive features that can be used to make a wide variety of applications.